The Ogee with Single Bullnose

Before discussing ancient influences, it is necessary to introduce a few modern terms. First: the classic Ogee. This is a premium edge profile with unassuming character. Envision a piano keyboard from the side. Now slightly soften the edges of the black keys and round out the edges of the white keys. If a granite countertop were a piano, its ogee edge could be the keys. The ogee profile is perfect for areas you wish to highlight in a room, like a center island. If your rule is to avoid competition between style elements, a polished standard edge is great for the majority of the space and the ogee edge for the focal points.

Second term: the Bullnose. It’s unclear whether this construction and architectural term originates from the image of a bull’s nose; however, the very idea may be what differentiates it in your mind from other edges. The simplest description is that it is a deeply cut, fully rounded edge on both the top of the edge and the bottom. The bullnose without the ogee is itself a highly popular standard piece, though one should note it is not as suited to the sink area, where a droplet of water will cling and curve over the edge to drip to cabinetry below.

When one pairs the Ogee and Single Bullnose together, it achieves a layered, classical look. It calls to mind the ionic columns of mid-6th century Ionian Greece, particularly three aspects of the column- the shaft, the base, and the stylobate. “The shaft” is the body of the column, typically fluted in Ionic columns. Where it meets at the bottom is the “base”, which in ionic columns closely resembles the ogee and bullnose described previously. These layered details rest on the “stylobate”, which is a square platform similar to a polished standard edge, square but softened.

Ancient architects loved their layering, and columns are a prime example. Ionic columns were so popular then that they have been resurrected over and over in modern architecture, from the buildings during the 18th Century Greek revival to today’s American Museum of Natural History in New York. The Ogee and Bullnose pairing is perfect for those architecturally-inspired homeowners who wish to nod to the classics, influence their home design with Renaissance or Mediterranean themes, or simply create an interesting focal point.

The Triple Bullnose edge, also sometimes referred to as a waterfall edge, is a highly custom series of bullnoses stacked. This edge has lots of detail and is suited to enriching a large kitchen or to accentuating a smaller space. Three tiers means there are two deep grooves, so keeping this stylized edge clean may be more challenging than, say, cleaning a beveled edge where there are no nooks and crannies for dirt to hide. Because the Triple Bullnose may need cleaning more often, it can be used as a focal point or accent area in the kitchen rather than in a high traffic area designated for cooking. For example, it is ideal for a busy family’s designated landing spot, a highlighted space that reminds everyone where notes, purses and briefcases, and cell phones go–out of the way of mainstream kitchen activity.

The Stacked Bullnose edge profile also can trace its genealogy to classical architecture. The most solid and least ornate of ancient columns were of the Tuscan order, influenced by Italian designers and pre-dating the Ionic columns of Greece. With their simple but elegant lines, they were once reserved for dignifying worthy areas like military buildings. Rather than the highly ornate capitals (the embellishments at the top of a column) one sees in a Corinthian column or the horn-like swirling capital of an Ionic column, the top of a Tuscan column is ornate in its simplicity. The Tuscan capital’s hallmark is three rounded edges stacked one on top of the other that leads directly into a smooth, non-fluted and tapering column. When individual builders realized how much easier Tuscan columns were to construct than other columns, the style became prolific, eventually decorating individual homes and gardens. The influence extends its reach today, abroad and at home. 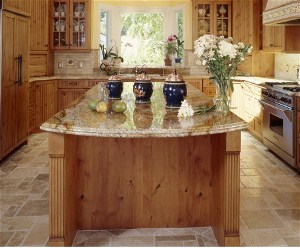 Today, the Tuscan-inspired look of the Stacked Bullnose edge is a great look for those who wish to travel to an Italian villa in their own homes. To those unmoved by architectural influence, this edge profile is an interesting finish that will compliment all granite selections and finishes.

Other standard edges for granite countertops include:

Premium Edges for granite countertops include:

Ahead Of the Curve - Explore the Latest Trends in Granite Countertops

Are Granite Countertops Going Out of Style?

Are Quartz Countertops Replacing Granite as the Best Choice For Your Home? Quartz Vs. Granite