MSI, North America’s Leading Supplier of Premium Surfaces, partnered with Kids Around the World (“KATW”) last month to help eliminate hunger in the world’s most vulnerable populations. The meal packaging event, a part of MSI’s philanthropic outreach, took place at its headquarters in Orange, CA. The company’s leadership team worked alongside the relief organization to provide 21,800 meals to children in South America and Africa. 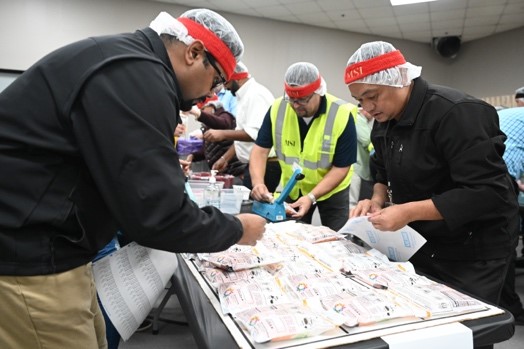 KATW launched its OneMeal program in 2008 to empower volunteers to pack nutritious meals to impoverished kids throughout the world. The nutrient-enriched provisions consist of rice, soy proteins, and dried vegetables. On average, one person can pack about 365 meals in two hours - feeding a child for an entire year.

Manu Shah, CEO, said, “Partnering with Kids Around the World was an honor. With one small act, our team had the opportunity to impact the lives of thousands. It was a meaningful way to begin the holiday season.”

Part of a global coalition to end hunger, the food-packing program delivered seven million meals to over eighty countries in 2019. Volunteer organizations can host food packing events at their facilities or the KATW warehouse.

“Whether it’s hosting a charitable event or opening the door for others to get involved, we believe that anything is possible when people come together for a common goal. We have been blessed with so much that we need to give back to the community,” added Mr .Shah

For those interested in joining Kids Around the World in their fight against hunger, visit their site today.

About MSI Surfaces Founded in 1975, MSI is the leading supplier of premium surfaces in the U.S. - including flooring, countertops, decorative mosaics, and wall tile, and hardscape products. The company offers an extensive selection of quartz, natural stone, porcelain, ceramic,luxury vinyl tile, and glass, among other materials. Headquartered in Orange, California,MSI has distribution centers across the United States and Canada and maintains over 150 million square feet of inventory, imported from over 36 different countries on six continents. For more information, visit msisurfaces.com.